Last week we received a call out of the blue from a worried gentleman in Austria.

It would appear that he had bought a car from an on-line dealer who had agreed to transport it for him from Northern Ireland to his residence in Austria.

The customer paid the dealer EUR 3800 for the car and transport.

A couple of days after he paid the EUR 3800, the dealer contacted him again to ask him to pay another EUR 1900 to cover transit insurance which would be refunded on safe delivery of the car to Austria.

They told him that normally the insurance would be EUR 3800 but the seller of the vehicle had agreed to cover the other half.

Without transit insurance, they said, they would not be able to obtain an export permit from the Ministry of Export and furthermore, storage charges would accrue at EUR 380 for every day the transport to Austria was delayed whilst waiting for the export permit.

At this point the client in Austria began to smell a rat and this is when he contacted us for our opinion.

We had to break the bad news that this whole deal was a scam.

1. He made payment to the fraudulent dealer by Western Union. No bona fide company would ask for a payment using this method.

3. Transit insurance would only be a 1-2% of the value of the car and would not be refunded on safe delivery.

4. No export permit is required to ship goods between EU member countries.

5. There is no such thing as a Ministry of Export in the UK.

I recommended that he immediately report the fraud to the Austrian Police and agreed to report it to the Police in the UK as well.

I duly called up the dedicated hot line to report a fraud and spoke to a very nice lady there.

She took down my contact details and a few details of the fraud and said I would be contacted by an officer.

This was last Thursday and I am still waiting for that call.... so much for the hot line!

It would appear that the police, in the UK at least, do not consider "small scale" frauds such as this a high priority. Not much consolation to the victims.

The web site concerned is called Safe Shipping Express Company and can be found at http://www.ss-express.co.cc

Do not enter into any transactions with this company and NEVER ever pay for anything on-line using Western Union.

You have been warned.
Posted by Wavecrest Ltd at 23:58 No comments:

Next Sailing from UK to Namibia 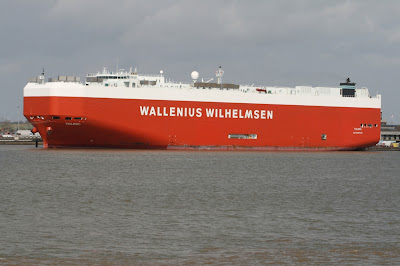 We are still booking cars, trucks, coaches and other vehicles for shipment to Walvis Bay, Namibia on our next roll on roll off sailing from Sheerness.﻿
The vessel is closing at 1000 hrs on Friday 4th March and currently due to sail on the 9th March. The ETA in Walvis Bay is 24th March.
If you would like a competitive quotation for shipping your vehicle to Walvis Bay, please call us on 01474 331146 or e-mail: glen@wavecrest.co.uk now.
Posted by Wavecrest Ltd at 13:48 3 comments: